Ed is a fighter. He has fought several chronic illnesses for the majority of his life but as he began to age, his Chronic Fatigue and PTSD started to take a toll on him both physically and emotionally. He had begun to live a life filled with anxiety and depression. He had to stop working, he started sleeping a lot, and he rarely left his home. Ed’s doctor suggested he look into getting a service dog so Ed took the recommendation and began to research service dog organizations which led him to Canine Partners for Life.

When Ed met with our trainers for his initial interview, he knew exactly what he wanted in a service dog. He wanted a dog that would help enhance his daily activities. Ed’s hope was that having a service dog would help him get out of bed each morning and help to create and maintain a regular routine. He wanted a dog to help him physically so he could increase his exercise, decrease his fatigue, and do things he loved like bowling and gardening. Most of all, he wanted a companion, someone who would love him unconditionally and reduce his feelings of loneliness and social anxiety.

The trainers were confident they could find a dog to match Ed’s needs so Ed was placed on our waiting list. After being on the waiting list for just under a year, the trainers invited Ed back to CPL to work with a few dogs who could potentially become his service dog. Ed walked with three different dogs and wasn’t feeling overly confident with any of them. The trainers had one last dog they wanted to try with Ed and it was the final dog that would steal Ed’s heart. When Ed grabbed hold of Cinder’s harness, it was completely different than the previous three dogs. He says, “It was love at first walk!” He had found the dog that would change his life.

Ed was matched with Cinder, a 70 pound female black Labrador full of love and spunk! Ed was eager to introduce his new partner, Cinder, to his very large and extended family. As he was trying to explain to his three-year old niece how to say her name, he said, “Her name is Cinder, like Cinderella, the princess!” The name stuck and Ed has always affectionately referred to his girl as Cinder Ella and WOW, has she lived up to her title of princess!

Cinder helps Ed physically by picking items up from the ground, tugging open drawers and doors, and carrying items. Having Cinder assist with these tasks helps reduce Ed’s fatigue which gives him more energy for the fun things in life and these two are always on the go! Ed has been able to be active again thanks to his service dog. The two attend concerts, take weekend trips, go camping in the Pocono Mountains, attend conferences, and more! Ed was even able to go back to work part-time with Cinder’s assistance. He now works as a paralegal and helps people with employment and civil rights issues.

Even greater than the physical help, Cinder has changed Ed’s life emotionally. She has reminded Ed to enjoy the simple things in life. When Ed is stressed; Cinder offers her belly for belly rubs. He says, “She wakes up happy EVERY morning and it’s hard to be in a bad mood when you wake up to a bounce on the bed and wiggly dog with a very excited tail wag.”

Ed is hopeful for many more years with the princess, Cinder Ella, who transformed his life. 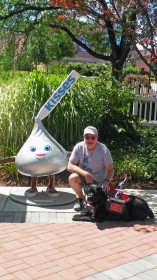