My name is Kortney. I am 17 years old and a senior in high school. When I was 8 years old, I started experiencing “feelings” that I wasn’t able to explain. I was sent to multiple doctors, including some that thought I was just a kid making up stories, before I was finally diagnosed with epilepsy at age 11.

After several failed medicines, the doctors decided that I had intractable epilepsy, meaning that the cause is unknown and it is uncontrollable with medicine. For my safety and for her own peace of mind, my Mom quit her nursing job to stay home with me. With all of the free time she gained, she began researching ways for me to acquire some of my lost independence. Luckily for us, Mom came across CPL and we immediately sent in an application for a seizure alert dog.

It wasn’t long before I got a call from CPL telling me I was matched with CorKey II. Shortly after we were matched, I faced the very difficult decision of undergoing brain surgery. I was told that if I kept going at the rate I was with my seizures, that the deterioration caused would soon start interfering with my daily functions. My family and I came to the conclusion that I should have the surgery. I endured two brain surgeries within six days of each other last January, and while we had good results there is still no guarantee that I will be seizure free.

CorKey II, to this day, has been my faithful friend, right by myside through all of my hospital staysand doctor appointments. He has alerted me since the beginning to my oncoming seizures and now alerts to my anxiety, even though I have been over 300 days seizure free! We work as a team and I pay careful attention to his warnings. Looking back, I have no idea how I ever lived without him.

CorKey II is my best friend and he is my road to independence. With his help and support I started going out with my friends more, and not being so nervous in public. Thankfully my mom no longer has to “creep” in on me at night, worrying about my safety. She knows that CorKey II will come get her if something goes wrong. Of course, CorKey II is with me everywhere I go, but he especially enjoys sitting at the bench during my basketball games. I, on the other hand, am entertained by the absurd comments we get every time we make an appearance in public!

There is never a dull moment in my life with my service dog! CorKey II has definitely changed my life for the better!
-Kortney & CorKey II- 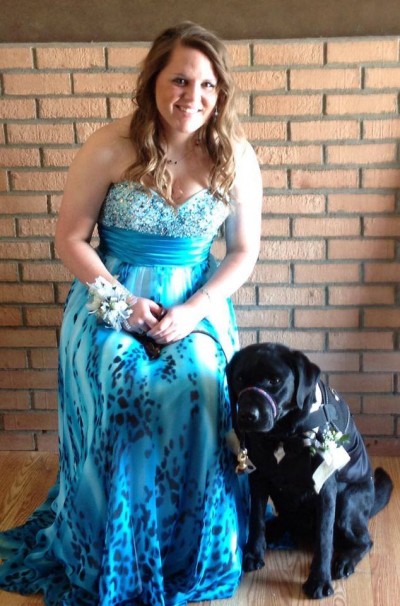