The ‘tween years sure aren’t easy for anyone. For Makena, it was a time of emotional upheaval laced with anxiety, behavioral issues, and stress.  However, at age 14, after many years of living with various physical and cognitive disabilities, Makena’s life was to “change for the good” when she was partnered with Carpenter, a home companion dog from Canine Partners for Life.

Now nearly 18, Makena recalls those early days with Carpenter. “I really wasn’t in a good place,” she explains. “It was the summer before 8th grade, and I was facing a transition to a new school. I think I cried most days. Carpenter…he got it. If I cried, he whimpered. It was like he understood what I was going through. He stayed close and comforted me.”

Trish, Makena’s mother, heard about CPL from a friend who had a child with autism. After she checked it out online, she spoke to CPL staff, applied for a companion dog for Makena, and brought her family to CPL for an interview.

“When we arrived at CPL, we saw young puppies and fell in love! CPL staff explained that there was about a two-year wait for a home companion dog. That’s a long time! Two years later, CPL phoned and said they had the right dog for Makena.”

Makena laughs at the memory. “My parents told me we were going shopping. But then we pulled onto CPL’s campus, and my family said: ‘They have a dog for you!’ It was amazing! We loved him immediately. Even my dad, who was probably the least enthusiastic, was sold. He’d been a union carpenter for 20 years, and when he found out the dog was named Carpenter, that was it! We took him home.”

Makena says having Carpenter has changed her socially, emotionally, and behaviorally. Before him, she rarely went outside, fearful of the neighbor children’s teasing. But, when she started to walk Carpenter, the kids would come up to her, and they could talk about her dog. They were excited to meet him, and by extension, that made Makena feel more accepted.

Now in her senior year of high school, Makena is living the life of a busy teenager. She tutors two young boys, has a part-time job on weekends, and she’s starting to make plans for college. “Some of my friends are thinking about going far away,” she says, “but not me. I want to be near enough to home so I can visit Carpenter on weekends.”

Being close to CPL is also important. Trish is quick to compliment the ongoing support Makena receives from staff members. “CPL is family,” she says. “We are so grateful to them for Carpenter. He’s given so much back to all of us. That two-year wait was worth it. We love our boy.” 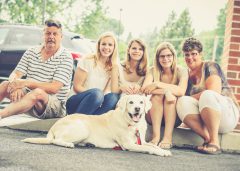