For Renee, the decision to apply for a service dog did not come easy. After years of visiting specialist after specialist she was eventually diagnosed with several medical conditions including POTS (Postural Orthostatic Tachycardia Syndrome) and Chronic Lyme Disease. Although each of her conditions severely impacted her ability to live a carefree life, Renee was hopeful that one day she would find a cure for her conditions and regain her independence.

Unfortunately after several years, it became evident that her health was not going to return to normal. Daily tasks like cleaning the house and going to the grocery store became burdens and required assistance. Renee’s family and doctors began to encourage her to apply for a service dog.

As a former obedience dog trainer, Renee consulted professionals in the service dog industry and made the decision to train her own dog, Sammy. Renee and Sammy successfully worked together for 7 years. When it became time to retire Sammy and consider a successor service dog, Renee remembered a conversation she had with CPL Program Director, Megan Esherick. Renee met Megan at a dog agility competition several years earlier and the conversation about Canine Partners for Life was still in the back of her mind. With her increasing medical needs, she knew CPL would be the right fit for her successor dog.

After going through the application and interview process, Renee was matched with a large, yellow Labrador named Ranger. The pair completed Team Training last year and graduated with the Summer 2015 class. Ranger assists Renee with several tasks around the house. He helps with the laundry, retrieves her phone, picks up dropped items, and will find her husband or daughter in the house. One of the most important ways Ranger assists Renee is by alerting to her cardiac condition. “His amazing ability to alert me to the autonomic changes (POTS) in my body has already given me the physical and emotional security that we can do anything,” says Renee. Ranger takes his job very seriously. “If I ignore his signal, he will stop and not allow me to take another step forward. He even acts as a roadblock by placing himself slightly in front of me. We have perfected getting me onto the ground, where he lays on my lap. When I think I can stand up, he will only allow me to do so when he knows I am ready.  When the cardiac episode is over, he will he allow me to lean on him as he assists me back to my feet.”

The greatest gift from this partnership is Renee’s increased confidence and independence. Just a few months after graduating, the pair traveled to Orlando, FL to visit the theme parks, something she has not been able to do for years. “Ranger gave me the confidence and courage to overcome the obstacles I was avoiding, such as, using a wheelchair in the airport, getting on a plane, and using a scooter at the theme parks.”

Renee and Ranger have an exciting life ahead of them. They will soon be escorting her son down the aisle to be married. Ranger will join Renee for the mother-son dance and even has a boutonniere to match the groomsmen.

This team has many more exciting adventures to come! 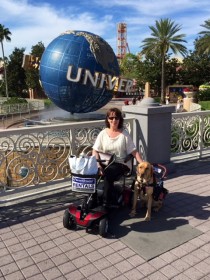