For most college students, their focus is on navigating the campus, studying, fitting in with their peers, and becoming independent from their parents. For Tori, her focus was on trying not to faint unexpectedly, and relying heavily on a network of friends and family to help her get through each day safely. Thankfully, all of those worries have faded away now that she has John by her side.

Tori had always been an active and hardworking young woman. She had plans to study abroad in Scotland and was on track to graduate from Washington College an entire year early. Those plans quickly changed when she began experiencing dizziness and fainting episodes multiple times per day. After several doctor’s visits, various medications, and many inconclusive test results, Tori was diagnosed with Dysautonomia at the age of 20. Although it was comforting to finally have a diagnosis, navigating life with a disability is anything but simple.

Prior to being matched with her cardiac alert dog, John, Tori felt controlled by her illness. She didn’t feel comfortable doing things like cooking or showering alone, which many of us take for granted. She hated to go in public alone, out of fear of fainting somewhere with no one there to help. She was feeling stuck in her life and wanted more from herself, but felt too scared to take the next steps.

Tori first learned about Canine Partners for Life (CPL) after her mom stumbled upon CPL’s website while doing some research on her condition. Tori continued to research the idea of a service dog and found a blog written by another CPL graduate. As she read further, she realized that she and this graduate had a lot in common. She decided that if a service dog could help someone coping with the same problems she faces, then maybe this was the best course of action for her too.

After applying for a service dog and meeting with the trainers, Tori was invited to CPL to observe a Graduate Support Class. It was there that she met John for the first time. She recalls it being an amazing day, as he actually alerted to one of her cardiac episodes! She could have just fainted in the middle of the class, but was alerted by John and instead, got to lie down and cuddle a dog. From that moment, she knew she had made the right decision.

Now that Tori has John to watch over her, she feels free to do what she wants and go where she pleases. His presence has made her realize how much of a burden her fear of fainting had become. “Comforting isn’t a strong enough word to describe how I feel with John,” Tori shares. He has given her a whole new outlook on life and has lifted the weight of fear off her shoulders.

Since graduating from CPL with John in July 2019, Tori and John have taken their biggest adventure yet – driving across the country and moving to Oregon for graduate school and a new job! The duo stopped at many landmarks and state parks, including a special stop in Idaho to visit with fellow CPL graduates, Abi and Bear. “Without John, moving across the country and going back to school wouldn’t be possible!” 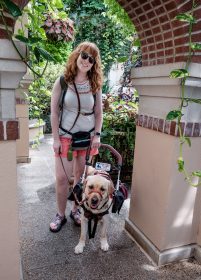