As many people have experienced, life truly can change in an instant. Recent CPL graduate, Connor, knows this fact all too well. However, despite becoming paralyzed from the chest down in a tragic diving accident, Connor has resolved to never let anything hold him back. Living as a C‑5, C‑6 quadriplegic since 2009, it was necessary for Connor to adapt his lifestyle in order to regain some of his independence. With the help of human and mechanical aides, he has continued to live on his own, drive a car, graduate from college, and maintain a healthy and active lifestyle. Unfortunately, there were still a few things that prevent Connor from feeling safe and independent on his own.

The question always on his mind was, “What could make my life easier?” Having grown up in a household with dogs and a mother who specialized in dog obedience training, Connor naturally thought about a service dog. He was aware of what a service dog could do for him and he decided to pursue this possibility. In an internet search for service dog programs in the northeast, Connor came across Canine Partners for Life and two other somewhat local organizations. After reviewing all his options, Connor chose to approach CPL because they were highly rated and seemed like the best fit for him. Not only was CPL fairly close to home, it had the level of training and support he was looking for.

Connor decided to truly commit to this process and drove seven hours to CPL for his initial interview with CPL staff. He wanted to see the campus and meet the trainers. He knew this would be a considerable commitment and wanted to make sure CPL was the right fit for him, which is something he couldn’t do over the phone. While the interview was more intense than expected, Connor truly appreciated that CPL staff took the matching process so seriously. He was also fortunate to speak to a recipient in training about their experience while on campus. After this visit, he felt sure he had made the right decision.

In the fall of 2015, Connor was matched with Topper, a female yellow Labrador from CPL’s breeding program. Though he wasn’t sure what to expect, he said, “From the first second I saw her, I knew she was for me.” The first day of training was intense and a little scary for Connor. Despite his experience with dogs, he wasn’t expecting to be in charge of his service dog so soon. But the bond they developed helped to reassure Connor that this was going to work. “I didn’t expect to develop such a strong bond with Topper so quickly…CPL has developed a process in which you are the only one interacting with your dog, building a relationship.”

Though the three week training was exhausting and intense, Connor was constantly amazed at what Topper could do. The Team Training process was an eye opening experience for Connor who says, “I can’t imagine going through the process again without that all-encompassing training schedule. It speaks highly of CPL and how prepared they want these dogs and their human partners to be.”

The culmination of Team Training is a graduation ceremony which recognizes the hard work of each graduating team as well as those who have contributed to the development of each team. At this ceremony, Connor was particularly moved by the incredible transformation each of his classmates experienced in just three weeks.

In the few months they have been home, Topper has already made life easier for Connor. He can rely on her when he goes out in public and at home. “It’s not as stressful to go out. I don’t have to worry about dropping something or opening doors. I don’t have to worry about all the ‘what if’s’ when I am out because I’m not alone anymore.” Not only does Topper assist Connor with tasks such as retrieving items that have been dropped or are inaccessible to Connor, or helping to reposition his body in his power chair or in bed, she also serves as a conversation starter. “Some people see the chair and aren’t sure what to say or expect. When they see a cute dog, it’s easier to converse with people. The dog draws the attention rather than the disability.” 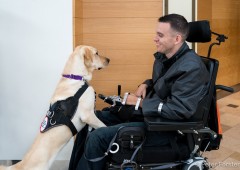