The past year has been a challenge for everyone, including John, but with every challenge comes an opportunity for change or growth and the past year changed John’s life for the better. He was matched with an affectionate, yellow Labrador named Evie, his home companion dog and new best friend. Evie entered John’s life at the perfect time. His disability can often be frustrating and create a sense of loneliness and those emotions were heightened during the pandemic, until Evie came along. Evie has brought immense joy to John’s life.

Prior to the onset of his disability, John lived a life of service. He joined the Coast Guard in 1975 as a Boatswain’s Mate. Most of his work involved maintenance, drug enforcement, driving small boats, and various assignments on ships. It was hard work but John enjoyed it. After about 10 years, John started having trouble climbing the ladders of the ships so he was sent to a nearby base for assessment. He spent several weeks in the hospital, had numerous tests, and was diagnosed with a progressive neuromuscular disease. He was placed on the temporary disability retirement list and his life began to change.

After his diagnosis, John decided to stay home with his children so his wife could go back to school and work full-time. He held a few part-time jobs but his muscle weakness and fatigue increased so by 1990, he fully retired. Although he had to retire earlier than expected, he was determined to stay active and independent as long as possible. He continued walking and driving for almost 20 years, much longer than the doctors originally predicted. Eventually, as his disability progressed, he started using a power wheelchair and had to give up driving. John stayed home a lot and since he wasn’t able to leave the house often, his family felt he could benefit from the companionship of a dog.

John had dogs all his life so he was very open to the idea of getting a dog but didn’t feel he could take on the challenge of training a puppy. He and his wife began to research different options and learned about companion dogs. They found CPL and felt the organization was a great fit for them. John was matched with Evie last Fall and said, “It was something positive to come out of COVID. I prayed for a dog and I received Evie.”

Prior to having Evie, John would often sleep late and stay in bed because he was lonely and unmotivated at times but with Evie, he gets up earlier because he looks forward to taking care of her each day. She brings happiness to his life. They now spend their days at home listening to audio books together, gardening in the backyard, and playing frisbee. John shared, “I want to care for Evie. She depends on me. She shows me affection all day and just livens up my life! It’s a special companionship with a dog. They don’t call dogs man’s best friend for nothing.” 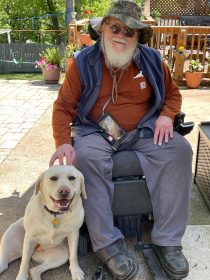